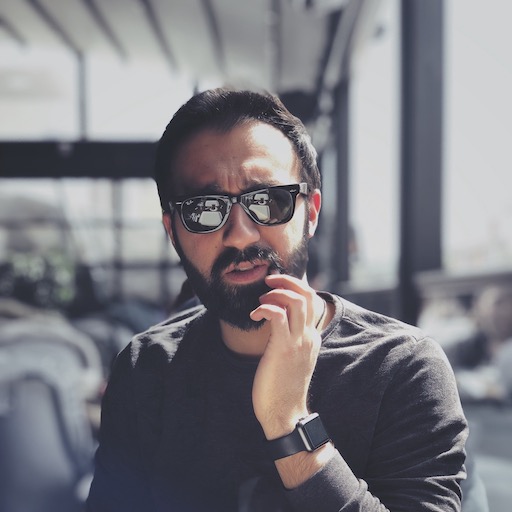 Don't Underestimate The Power of Internet

Few weeks ago, we have started to work on our new project: Super Portfolio. That was a simple project but it growed bigger and bigger. At the end, we had a massive project in our hands. But whatever, it was fun to build something useful. Everything started with these in mind. But of course nothing is done like this.

After starting this project our only intention was creating something useful for ourselves. Also we didn’t have any exceptions about growing this project. But like every project you start thinking about the possibilities.

We have finished every bits and bolts of the project and it was time time share it as “Beta” somewhere. Even if you are testing your project heavily there are millions of different configurations for computers and browsers.

We have seen the first spike on analytics after starting to share Super Portfolio on Twitter heavily. It was shown that we might have something useful there. Of course causation is not correlation. Maybe it was just our “virtual friends” were sharing the project.

This gave us enough confidence to share it publicly.

This post didn’t get any traction AT ALL. But what I have learned from this is numbers doesn’t mean anything. Got one upvote and didn’t care and move on.

At that time I have realized I have a message on Reddit. Checked the message and that was interesting. Someone on the internet was offering me a job!

But of course I wasn’t excited at all. This might be anyone on the internet and I was not trusting to Reddit. I have seen many people to react out but none of them was legit. EXCEPT THIS ONE!

After that message I have responded with cautions: 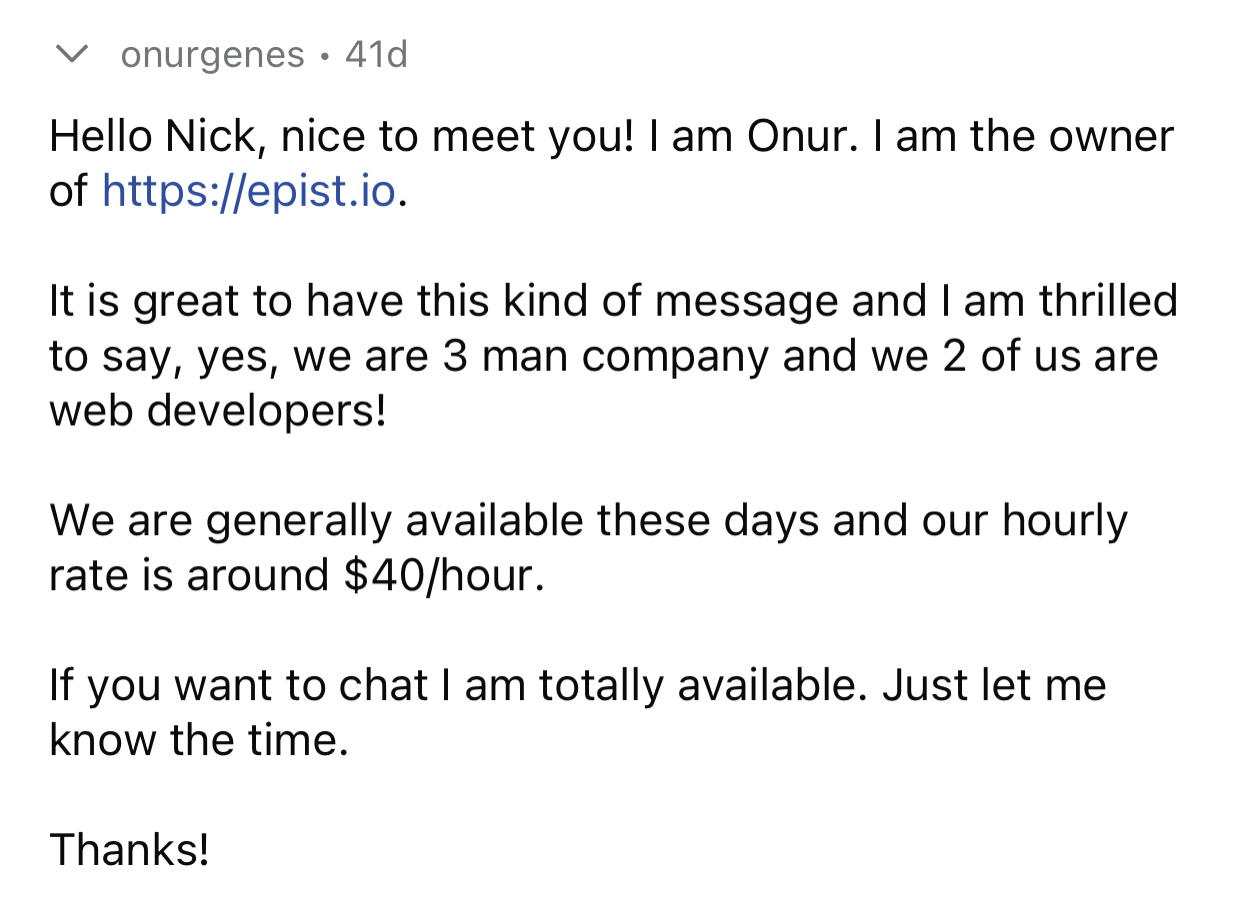 I was just trying to see if this is legit or not. Also some marketing doesn’t hurts, right?

After few days, with back and forth messages, we decided to meet for discussing about what we can offer, how can we help them etc. But it was a Zoom meeting and I wasn’t expecting anyone to show up. But it was fun thing to have.

And They Showed Up!

It was one of the moments in my life which I was thinking “It might be real, huh?”. Because this guys were real! They are here and talking chatting and it was so much fun to have this kind of meeting. No one has anything to lose and everyone was joking.

After that they said, let’s have another meeting in 3 days. I said “OK, sure. Even if they doesn’t show up, it was fun!”.

The mail came after 3 days and it was quite interesting! They have said “We want to meet with you and your team in real life. Let’s meet at your office!”. That was quite shocking because pandemic was there, they don’t know me, maybe I am a psychopath on the internet (Don’t trust to anyone on the internet, kids).

Even these conditions, they came!

They came to Ankara, Turkey. From Germany. THEY CAME TO ANKARA JUST FOR MEETING WITH ME!

Let’s Do Some Business

After meeting at our office, we discussed about one of their projects and you know what: We are making their project right now!

Which is incredible and Super Portfolio is already profitable!

After this quite shocking events we have decided to finish Super Portfolio because this started to look like a legit project.

We were planning the day for launch but of course, we were adding new features every day, fixing bugs. At this point I have realized this project won’t be ready to launch FOREVER.

At that saturday, we were just trying to fill the form on ProductHunt. With placeholder images and some copy pasting, we will save and everything will be ready. We can decide the launch day whenever we feel confident. At least, that was the intention.

Things started to get interesting at that point.

#1 Product of the Day

At least for 2 hours we were just looking at the screen for stats. Some people show up, few upvotes and we were not even close to be on the front page. But it was just fun to watch. Like watching some race.

After few hours we have seen that, we are the #2 product of the day! It was quite amazing for an accidental launch. 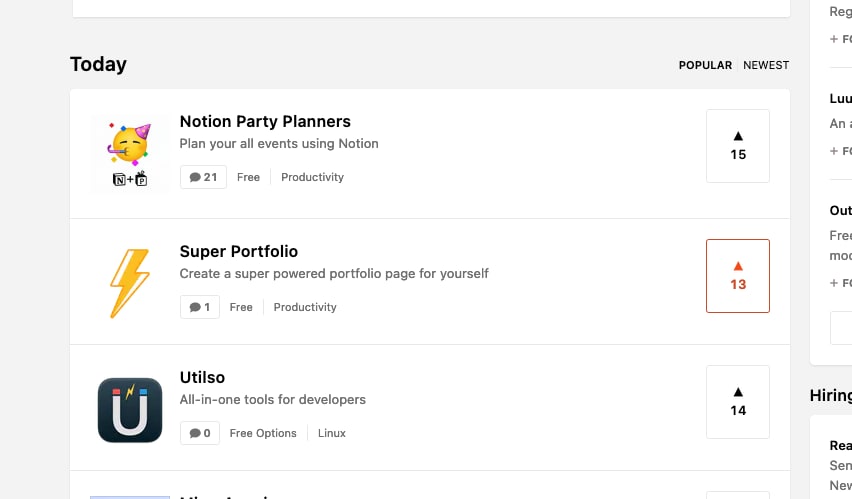 We decided not to check stats for 2 hours. It was so stressful. But I couldn’t resist. I have checked and at that point we save this: WE WERE #1 PRODUCT OF THE DAY! 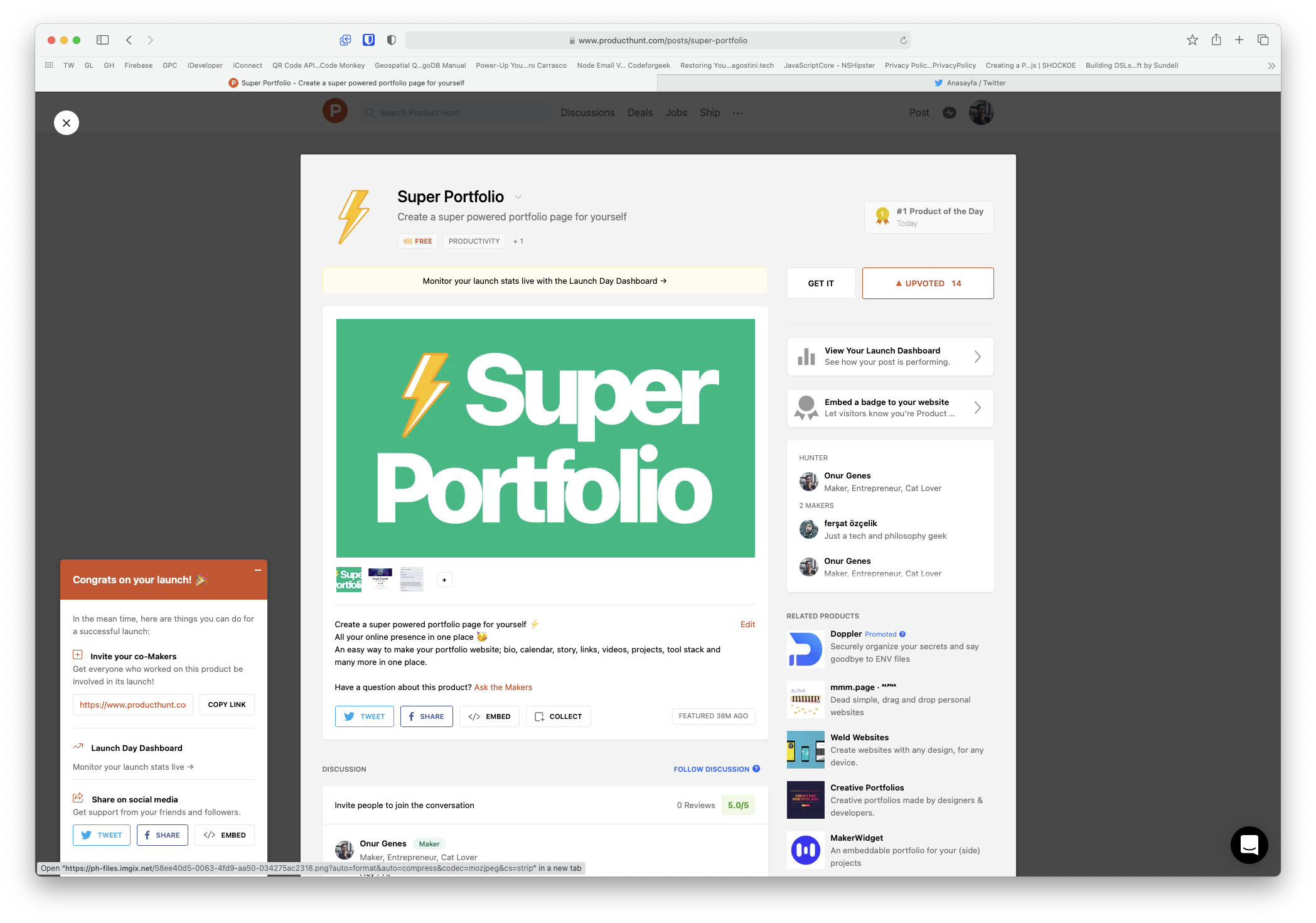 After that point things starts escalate quickly. When people saw the you, they will just upvote more. At the end of the day we won! 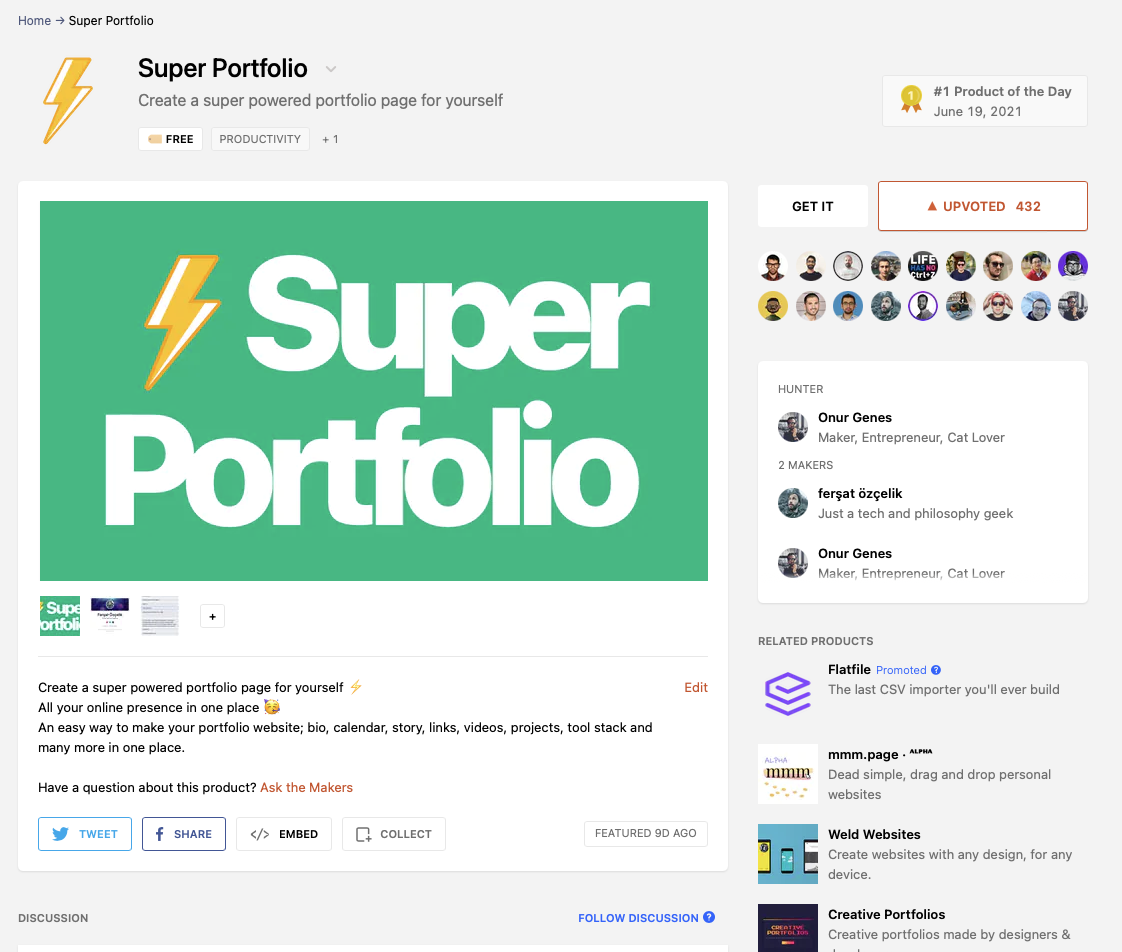 Also the charts on Simple Analytics is looking pretty great. 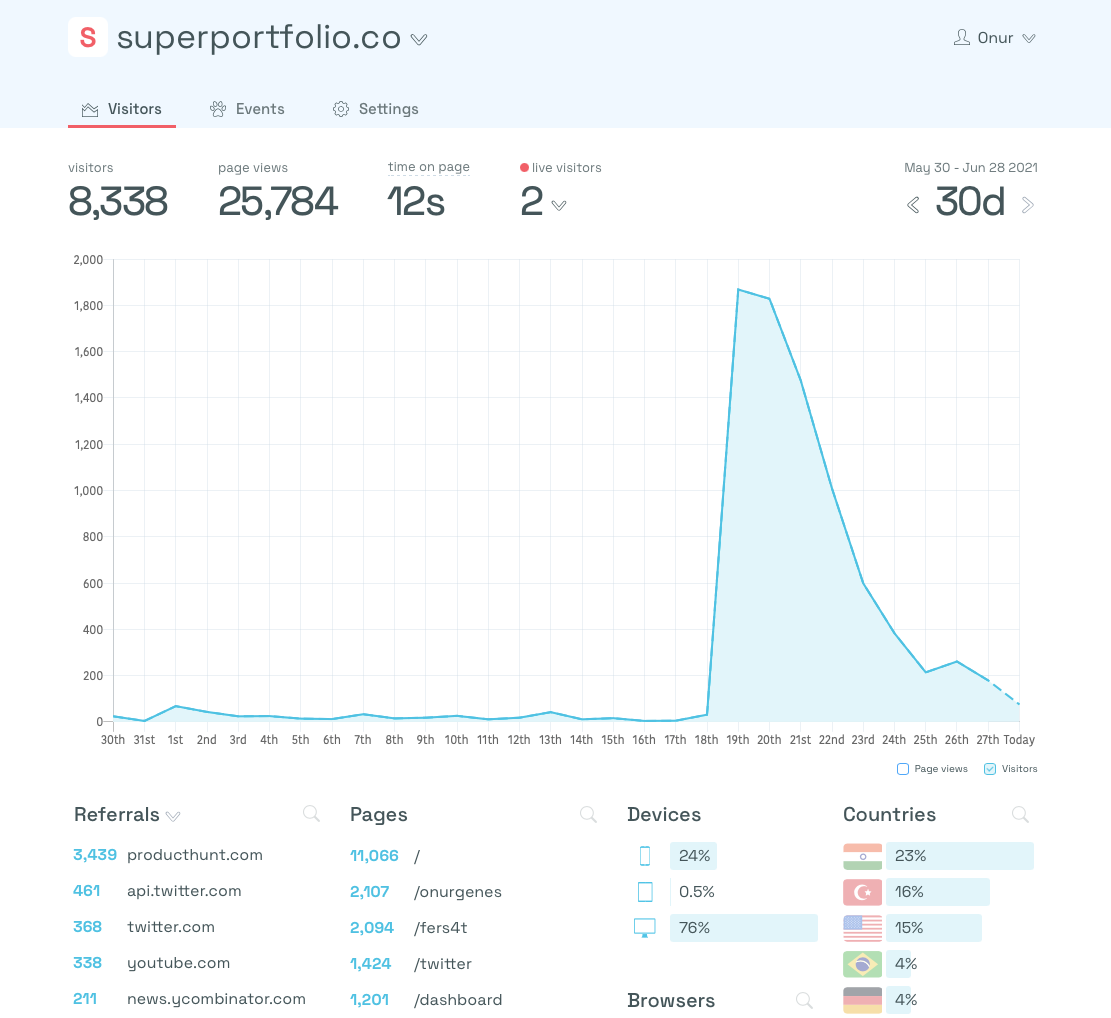 Future of the Super Portfolio

Currently we are working on new features as we stated in our Roadmap. We are trying to add them as quickly as possible.

If you don’t believe the power of the internet, you have to think again. I am not saying everything on the internet is legit but it can be really powerful. Now thanks to Super Portfolio we have new contracts and thinking about making new projects in the future.

Of course, if you need us to make the project for you, you can find us at epistio’s Website.

How did I meet with Adriaan? Few years ago when I was wandering on the internet I cane across a man called Adriaan van Rossum. He was talking about a product which is a competitor to Google Analyt...

So you have bought the shiny new M1 Macbook Pro, Macbook Air or Mac Mini. What now? It is a different architecture for CPU wise. It is not a regular Intel CPU. Not every app or program you are usin...

Most of the time when you are building an app, you have to have some kind of login or sign in mechanism. Thankfully big providers like GitHub, Twitter or Google giving an easy way for this. Sign i...